My husband was out of town for 108 hours and 15 minutes (but really, who was counting?) and he came through the door not a minute too soon. We have a 3 year old who is going on 16 and a 10 month old. Luckily, they both sleep through the night.

First of all, mad props to all of the single parents out there who have to do it all.

Without much, or any help. Being a parent is hard work when you have a spouse to do it with, let alone having to do it all on your own.

By the end of the week, I wanted to lay in the fetal position crying until my husband got home. But I stayed strong, for the littles.

In the midst of my chaotic week, this quote from C.S. Lewis popped into my Facebook news feed. 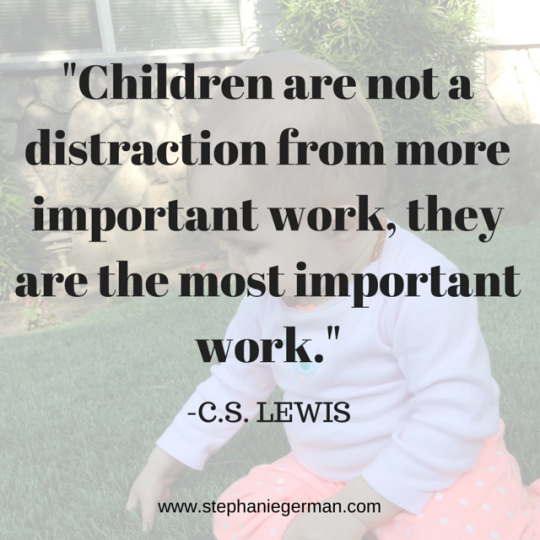 This helped put the day into perspective, but it was still a struggle!

Here are 7 things I learned being a single parent for a week:

On a normal week, we prep everything on Sunday, or as much as we can. We did this together as we normally do since my husband was not leaving until Monday morning. Each night, I found that to get out the door on time, I had to prep as much as I could the night before.

The one night I didn’t prep? I yelled at the 3 year old to hurry up. Drop off was quick. We were rushed. And I was a little late to work.

After that morning, you better believe I prepped for the next day even though I was exhausted.

And I wasn’t kind one morning.

I apologized immediately (because you aren’t a good parent if you cannot admit when you are wrong) and remembered she is three. Three and she can dress herself and put her shoes on and get her own cereal for goodness sake.

After the 1st day (yep, you read that right), I realized I needed to slow my mind down and speak kindly to my girl.

To get anything done.

Think it will take you 5 minutes? Wrong. Halfway through the week I realized that I need to give myself three times the amount of time I thought it would take. Then, when we were done with the task or out the door early, I felt accomplished.

All about survival people.

This was both in terms of what I thought I could accomplish during the week and expectations of my kids. I decided half way through the week that if the kids were clean, fed, and safe, I was calling it a success.

I tried to keep everything as consistent as possible. Morning and bed time routine the same, which seemed to help. It provided stability. Kids seem to thrive on a schedule and stability.

This includes consistency in disciplining too. My threenager decided to throw a fit over something every night. It would have been easy for me to change expectations of her (which are age appropriate).

I was lucky enough to have the support of my parents and friends during the week. This relieved some of the stress a couple of the evenings. I was thankful for the meals that were provided, even if the three year old threw a fit and wouldn’t eat.

Parenting is hard. Being a single parent is even harder. When all is said and done, it is about raising these little people to be loving, kind, and courageous.

What is one of your biggest parenting challenges?