We have all been in that work situation. The situation where the person who is in charge during your working hours makes work less than tolerable. There are many reasons you might say you work for a manager or leader who is lacking in skills associated with their position. This can make going to work feel more like a chore than it should.

The likelihood of you doing anything about the fact your supervisor is hypocritical, a bad communicator, or authoritarian in their leadership style is very slim.

You most likely need the income; that is why.

What Makes A Supervisor a Bad Boss?

There are many reasons you might consider your supervisor a bad boss. A bad boss could be defined as such because they are a terrible communicator. You leave conversations and meetings with a general sense of confusion.

They drag out meetings because they can’t keep their mind on one topic and jump around on the agenda.

They lack emotional intelligence so they do not know how to communicate with different personality styles.

Some supervisors are considered bad because they micromanage. You can’t get anything accomplished without being asked a bunch of questions and having to report back every time you take a step forward in a project.

Other times your supervisor may decide to make sure everyone knows they are the ones in charge by their words and actions, barking orders.

The one that always gets to me is when I hear of supervisor, a manager or leader, who says one thing but does another. Their character shines through. After this occurs, I am always leery of trusting them.

One of my all-time favorite movies is Office Space. After being in the working world for 10+ years and talking with friends about their work situations, I believe it shows a pretty great depiction of the average workplace. Unengaged workers, horrible boss, bad HR, and consultants coming in trying to figure out how to make the organization run more efficiently. 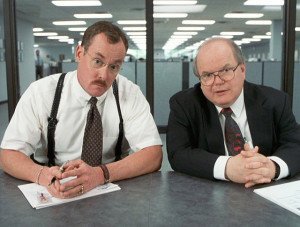 Peter Gibbons, the main character, meets with these consultants and tells them about his average work day. He then shares with them it does not matter if he works harder or smarter because there is no incentive. Then he shares this gem:

Bob Slydell: I beg your pardon?

Peter Gibbons: Eight, Bob. So that means that when I make a mistake, I have eight different people coming by to tell me about it. That’s my only real motivation is not to be hassled, that and the fear of losing my job. But you know, Bob, that will only make someone work just hard enough not to get fired.

Aren’t you glad you do not have eight bosses?

How to Make the Most of a Bad Situation

The reality is there are bad bosses everywhere. They most likely have no idea they are a bad boss or even know how to go about fixing it. It takes a deep level of self-awareness to recognize your faults and want to make changes.

You could quit one job in hopes of finding another job where your boss acts like a leader. But the grass is not always greener on the other side.

[bctt tweet=”Take the opportunity to manage up and lead yourself.”]

You will most likely not go to work and quit your job tomorrow. As this is the case, you should learn to thrive in your current situation. Take the opportunity to manage up and lead yourself. Here are 7 ways to deal with a bad supervisor:

There are many managers and “leaders” who should not be in the position they are in. However, as they are your supervisor, you most likely are in contact with them throughout the day.

This is your opportunity to show them how to behave in certain situations. I am not saying you call them out on their behavior. I am saying you need to treat them the way you want to be treated and show them a better way to handle situations. Offer solutions to situations that your boss may not have thought about. If you have strengths where they are weak, show them the way to improve in that area by being an example.

A leader is simply someone who has influence. Influence your supervisor.

When your supervisor is not good at communicating, it can cause a major headache. In one situation I was in I learned early on my boss lacked emotional intelligence, which is key to communicating well with others.

My boss did not know how to use tone appropriately, made jokes out of serious situations, and approached sensitive conversations in the wrong way. Understanding your boss lacks emotional intelligence will help you understand they lack the skills needed to communicate. It also helps to affirm you are not crazy.

In one situation I was in, I left my first meeting with a new supervisor unsure of what my action steps, or deliverables, were.  I saw the same thing take place in two other meetings I attended with co-workers. I realized after these three encounters my boss did not know how to wrap up a meeting.

In our next meeting, as one topic would be coming to an end, I asked “what is expected of me in this regard?” or “what is the deliverable from this topic?” Sometimes I was told there was not an action step, the discussion was just for my information. At least then I knew.

If it is unclear, make sure you know exactly what is being asked of you when leaving a meeting with your supervisor.

Micromanagers like to have a tight grasp on the work and employees they oversee. They do not have the ability to delegate or know how to empower their employees. I decided to always take the approach of asking my boss for more work when my projects had been completed. When I saw my boss doing something I could handle, especially if it fell in my job description, I expressed I would be happy to complete the task at hand.

I also showed I was capable by under promising and over delivering. This helped my micro manager loosen the grasp a bit.

We all want the ideal boss. The one who communicates well, creates a shared vision, understands how to work well with others, values your opinion, and shows compassion. Unfortunately, I have found this is not the norm. So how do you deal with it? Recognize they are human, with many flaws. Show them a different way, lead up.

It would be easy to begin slacking off at work due to your boss, taking longer to complete tasks or taking a longer lunch than allotted. When you do that, your own integrity becomes questionable. Instead, continue to do your job to the best of your ability. You have a right to vent, but keep that to your spouse or friends. Put your best foot forward each day.

While you do what is mentioned above, do your research and homework on other companies. See what job openings are available. Get your resume in order. Update your LinkedIn profile. If you are not in your dream job, it will be easier to pursue other opportunities. When the time is right, start applying to other positions.

We all want to enjoy going to work, considering we spend so much time there. As you learn to lead yourself, you will learn invaluable lessons. When you have a bad boss, you can learn valuable lessons in leadership. Even if those lessons include what not to do.