When I go to work, I look to my boss, who is supposed to be the leader, to be an example. It often happens that what is said and actions displayed do not match up. When that happens, my level of respect goes down for my supervisor.

I have found that this is true for me being a parent as well. My daughter has a way of reminding me when my words and actions do not match up. She is only 3, so it’s not as detrimental as it will be when she is 16.

Thinking through these two scenarios, I have found great similarities between the times I have led a program and when I have led my kids as their mom.

As a leader, you have people under you. These people are called employees, or followers. They watch everything you do and say. Sometimes they ignore you completely. In a business, those that are disobedient are reprimanded. And eventually fired.

As a parent, you have people under you. These people are called your children. They watch everything you do and say. They let you know when what you say and what you actually do does not match up. Sometimes (most of the time) they ignore you completely. In a home, those that are disobedient are reprimanded, and there is usually screaming involved, because timeouts are clearly the worst thing in the world (amiright?).

When we ask our followers to do something, they are watching to see if we are going to act in the same manner we are asking of them. As a leader, if I don’t show the way, they will do as they please. This is true in my home as well.

My three year old, who is going on sixteen, has begun to repeat the words and tone I use.

All too often I do not like what I hear. 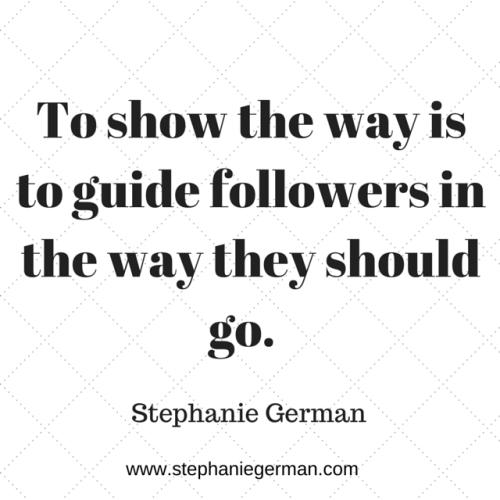 To change the story being told in our house, I have to change the way I speak to, and interact with, my three year old. This doesn’t mean I let her do whatever she wants, whenever she wants. Clear boundaries need to be set. However, there is nothing more telling than hearing your child repeat the words you have spoken to them.

To the change the story in your organization, you as a leader need to be willing to serve those you oversee. If you are not willing to do the work, why should those you lead willingly go about doing it? You begin to take long lunches, your employees see that and follow suit. You sit in other offices gossiping, others notice and follow suit. You should not expect your employees to behave in a manner that you are not willing to behave in yourself.

To show the way is to guide followers in the way they should go.

Shown integrity leads to a higher level of respect and loyalty.

[bctt tweet=”Shown integrity leads to a higher level of respect and loyalty.”]

Integrity and honesty are shown time and again as the two highest qualities employees and followers desire out of their leaders in studies conducted. There is a higher level of respect when you as the leader do what you say and show the way. Whether you are the CEO of a Fortune 500 company or the CEO of your home with 5 little ones around you, make sure you are showing the way. Eyes are always watching.

In what ways are you being a person of integrity with those you influence?