Unless you have been living under a rock, there have been 2 instances in as many days in two very different industries where men have used their power and influence to put women down. It is time that leaders to do better.

The Houston Astros Assistant General Manager yelled over to a group of female reporters thanking God for a player they hired when he was on a 75 game suspension for domestic violence. That is the short version. You can read more about it in the Washington Post. The Astros PR department wrote a response to say that an article Sports Illustrated wrote was inaccurate, to which male reporters said, hold up, that’s all correct. This has become such an issue that the MLB commissioner has started an investigation into the matter.

John MacArthur, who is a well-known conservative pastor in Southern California was playing a word association game and when Beth Moore was the name given he said “Go Home.” Of course all of the white conservative men in the crowd laughed because his response fit into their box and own worldview. As described in Relevant Magazine, “MacArthur then launched into a diatribe about how ‘the church is caving in to women preachers.’ He went on to compare her to a TV jewelry salesperson and then went on to criticize the #MeToo movement.” He is upset that she is making an impact and preaching the name of Jesus. The video can be viewed in the article.

On the second one, aren’t they supposed to be on the same side?

I have been in that situation. I have been in the hostile work environment where a man had a power trip and thought they were above their words and actions. It became uncomfortable and led to me leaving. Why would any employee want to work or be around someone whose ego is too big for the room and they think they are the end of all things?

Why can’t we do better?

When will we do better?

Why must we put others down to make ourselves feel better?

[bctt tweet=”Why must we put others down to make ourselves feel better?” username=”stephaniegerman”]

These people have influence far greater than they understand. A leader is someone who has influence, period. It isn’t a title, although it’s usually associated with a title. 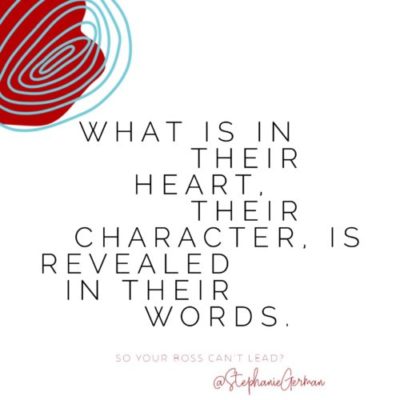 [bctt tweet=”They don’t understand that what is in their hearts, their character, is revealed in their words.” username=”stephaniegerman”]

This is the exact reason I wrote my book, So Your Boss Can’t Lead?. This is the garbage that I experienced and others experience daily. Male. Female. A bad leader is a bad leader and it’s time to start doing better.

P.S.- Continue the conversation on Facebook! I would love to hear how I can help you on your journey. To receive up to date content, sign up to receive my free 7 Steps to a Prioritized Life on the home page and posts will be delivered right to your inbox.  If Facebook isn’t your favorite social media site, you can connect with me on Twitter, Pinterest, and LinkedIn.

Stephanie German is a leadership coach, adjunct professor, and dedicated work-from-home mom. She holds a master’s degree in organizational leadership and is the chair of the Red Shoe Society Central Valley (Ronald McDonald House guild). When she’s not coaching clients or writing about leadership, Stephanie is usually headed to the mountains or the beach with her family, drinking savory wine, or working on the latest project with her husband. Stephanie’s greatest desires are to nurture the next generation of leaders while raising her own children to be strong, independent, and brave. She lives in Fresno, California with her husband Blake and her three spunky daughters, Cara, Kinsey, and Peyton. She is the best-selling author of So Your Boss Can’t Lead?